What is the difference between glass and crystalline material? Glass is an amorphous solid, which means its atoms are randomly positioned with respect to each other. Whereas, a crystalline material may contain the exact same type and quantity of atoms as glass, but the atoms are ordered in rigid, well-defined patterns. Some examples:

Crystalline materials are solid and keep their shape until they reach a very specific temperature, at which point (the melting point), they become fluid. In contrast, all glasses, by definition, are viscous fluids, even at very low temperatures. The viscosity of glass is determined by the temperature of the glass. Even at room temperature some types of glass are moving, albeit very slowly.

For production purposes, when tolerances such as flatness are very tight and temperatures are high, the choice of a crystalline material is superior to glass because it will maintain its shape at higher temperatures. I.e. glass may change shape over time, regardless of the melting point and especially at elevated temperatures.

Both crystalline solids and glasses are normally colorless in the pure state. Impurities are actually what give natural sapphire and common glass their color. The impurities also change the mechanical, thermal and optical properties of both material types, but especially for glass.

SAPPHIRE:
Sapphire is a single crystal - Aluminum Oxide (Al2O3) - which is colorless and optically clear. Synthetic sapphire is grown in boules (bulk pieces) no larger than 300mm in diameter. It can also be grown into shapes such as sheets, ribbons, domes and tubes with very smooth surface qualities, high purity and optical translucence. When used "as grown" there is very little need for grinding and polishing.

FUSED SILICA & FUSED QUARTZ GLASS
Fused quartz and fused silica are the amorphous form of quartz. Fused quartz is made from purifying and melting natural crystalline quartz (usually natural quartz sand). Fused silica, a purer version of fused quartz, is a commercial glass usually made from a silicon-rich chemical precursor that is then oxidized to silicon dioxide. Chemically known as SiO2, silica is "pure" glass. All other commercial glasses are SiO2 with dopants added to lower the melting temperature and modify optical, thermal and mechanical characteristics.

BOROSILICATE GLASS
Borosilicate glass is an "engineered" glass developed specifically for use in laboratories and applications where thermal, mechanical and chemical conditions are too harsh for standard, household-type glass. Some common names of borosilicate are Pyrex™ by Corning and Duran™ or Borofloat™ by Schott Glass. Like most glasses, the main component of borosilicate glass is SiO2 with boron and various other elements added to give it its excellent qualities.

SODA LIME GLASS:
Soda lime glass is the "original" glass, appearing in its most basic form thousands of years ago. Commonly called float glass, it is often formed by floating soda lime glass on a bed of molten tin. It is also knows as crown glass, a high-silica form of soda lime that was historically used for windows. Soda lime glass is composed of SiO2: sodium oxide (soda) and calcium oxide (lime). About 90% of the glass used in the world - including most windows, dinnerware, art and lighting products - is one of 50,000 variations of soda lime glass

Although soda lime glass typically has a green or blue-green tint to it, the iron content can be reduced to the point where the glass becomes crystal clear, also known as "water white."

DIAMOND:
Diamond is such an extraordinary material that it deserves mention even though RSW only makes a few diamond sight windows per year. Not only has diamond been noted for millennia for its beauty and hardness, it has a number of other unique, qualities that make it an excellent sight window material. 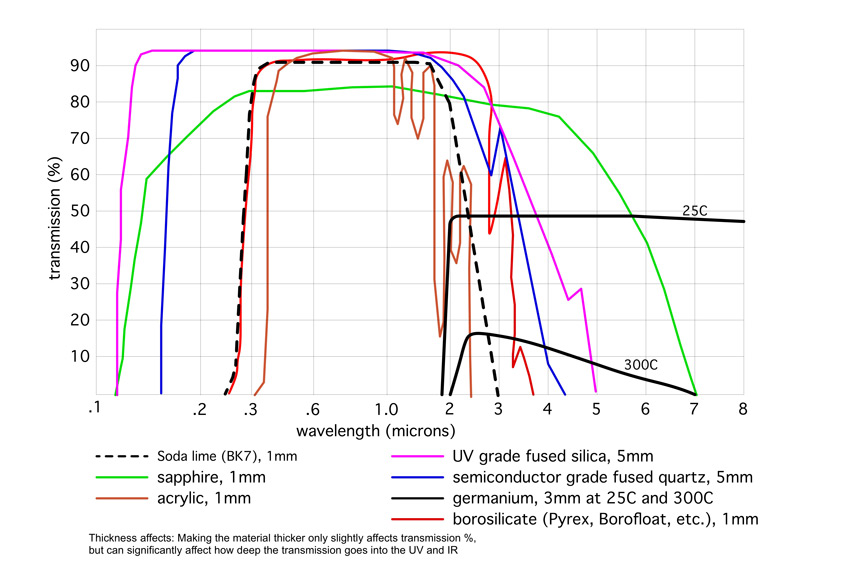 Rayotek Sight Windows is a division of
Rayotek Scientific, Inc